Some of our best Canadian friends hail from the maritimes, as do several of my husband’s favourite Canadian authors.  Such an easy connection with people who grew up so far away from us is both astonishing and intriguing.  Furthermore, we love seafood, and this stunning travelogue from Simple Bites gives evidence of how happy we would be to eat local catches fresh from the coastal waters.  For so many reasons, the Atlantic coast beckons us to fulfill our destiny and explore these tiny provinces to the east.

Until three years ago, I knew next to nothing about New Brunswick–and the maritime provinces in general.  But then I met my friend Julie, who grew up there.  Between her stories and the wonders of the internet, I have learned a few things.

Molasses, I discovered, has a long heritage in the maritime provinces, owing to the trade routes that brought supplies to the early British settlers.  And now whenever I bake with molasses, I think of my good friend and imagine her mother and father’s table with a jar of molasses in the centre. 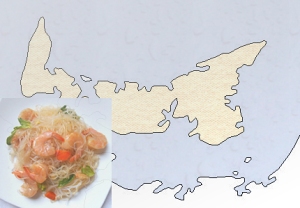 Like many of my contemporaries, my introduction to the beauty and serenity of Prince Edward Island came from the Anne of Green Gables movies.  What I’d like to see more of and taste in person is the fresh seafood!

The Scottish influence on these Canadian isles is something I am keen to experience.  Scottish dancing and scones with tea would be two of my top picks.

Starting with a time zone that’s 30 minutes different from the next province, Newfoundland and Labrador have a reputation for being different. I really want to see for myself if all the “Newfie” jokes I’ve heard from other Canadians are based in reality.

I hope you’ve enjoyed my three-part tour of Canada.  If you haven’t explored the six other provinces with me yet, be sure to check out the western provinces in Part 1, and Ontario and Quebec in Part 2.  It’s been a pun journey!